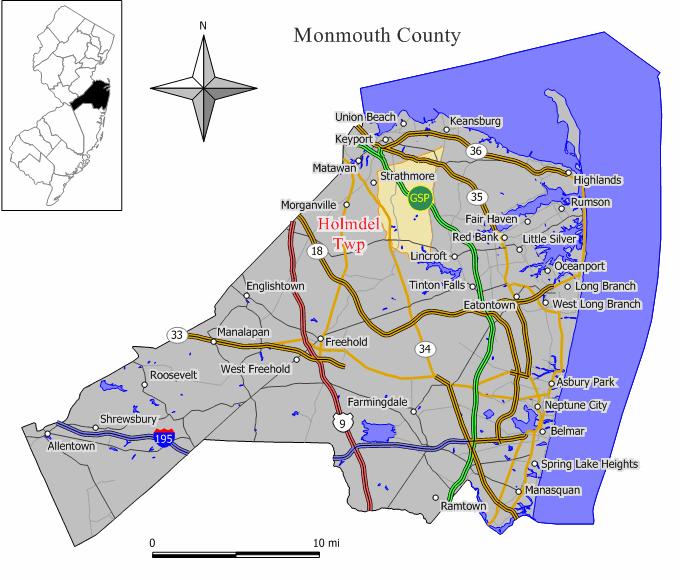 Holmdel Township is a township in Monmouth County, New
Jersey, United States. The township is centrally located in the Raritan Valley
region, being within the regional and cultural influence of the Raritan
Bayshore. It is located in the New York Metropolitan Area and is a major
bedroom community of New York City. As of the 2010 United States Census, the
township's population was 16,773, reflecting an increase of 992 (+6.3%) from
the 15,781 counted in the 2000 Census, which had in turn increased by 4,249
(+36.8%) from the 11,532 counted in the 1990 Census.

Holmdel is located 15 miles (24 km) west of the Jersey
Shore. The township is notable, among other things, for its historical and present connection to Bell Labs. Important evidence for the Big Bang was discovered at a Bell Labs facility in Holmdel by Arno Penzias and Robert Wilson, both of whom won the Nobel Prize in Physics for their work here. In addition, former Secretary of Energy Steven Chu earned a Nobel Prize in Physics
for his work on laser cooling in Holmdel.

Holmdel's picturesque beauty, proximity to New York and main highways, award-winning public schools, large homes, rich history, the PNC Bank Arts Center, and the presence of many high paying jobs within commuting distance led the township to be ranked the #1 "Six-Figure Town" by Money magazine and CNN for 2009.